This is a very late post, but I wanted to do it anyway. Unless you are interested in local politics or you are using this as some sort of reference on me, you needn't read further. Most readers of this blog will not be surprised by my political leanings, and I don't have a great reason for revealing my ballot other than this elections strangeness. In every other election I have participated in I have voted for the winners at least 85% of the time.

House of Rep: Skelton (D) - Won (beat the same guy he has for at least the last 4 elections)

No state pension for Felons: No - Passed

Tobacco Tax Amendment: No - Failed (This was a doozy. Not only would it write a sales tax into the Constitution but it created a new government funded health care account. Thankfully, Missouri still has too many smokers to pass this one.)

Embryonic Stem Cell Research: No - passed (One of the most poorly written summaries for an amendment ever)

State Senate: Delbert Scott (R)- Won (this election should not have been as close as it was)

Prosecutor: Dad - No opponent (although we kept wondering what Dad's primary opponent would come up within the days before the election.)

Jill and I have discussed many parenting issues since she became pregnant with Cannon. We haven’t decided everything (for instance what kind of school he will go to), but there has been a lot of discussions. One of the decisions we have made, though, is that we will not hold our son down and tickle him.

Jill is fairly ticklish. I would say more than average, but I’m not sure I’ve tickled enough people to make that judgment. Recently, it came up that one of her childhood traumas was the relentless tickling from other family members. As she spoke my eyes glazed over and I was transported back to long repressed memories. My sister, who was more than five years older than me, would tackle and sit on me, pin my arms with one hand, and slowly bring her fingers down in a moving claw. She would chant as the fingers came closer, “here comes the spider, here comes the spider.” I was too young at the time to understand the demonic séance she was performing. She would call forth some unholy spirit to make me writhe in agony until my breath became short as more and more air was somehow exhaled without being replaced, all the while sounding like laughter to the parents ears. Those times, and they happened often as I was young, are to this day the closest I have come to death. I don’t think my words adequately describe the feeling, but I found the picture below that comes close. 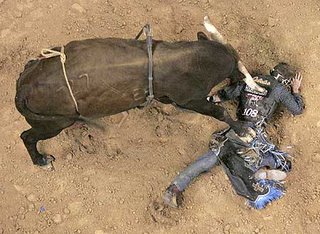 Jill describes a similar experience. For this reason we will protect our son from our base instinct to tickle that pudgy belly.